An easy 7am start, not long before low water, preceded a pleasant amble down the fairway and across Studland bay, before leaving the protection of St Albans (Aldhelm?)’s head well to starboard and tacking out to sea in an overcast sky; a fresh to strong breeze with a moderately uncomfortable sea running, from days of strong wind blowing in the same direction.

Spirits were dampened slightly by the, by now, regular conking out of the donkey, used to keep up passage making time and adding a few degrees to the angle we could sail to windward (yes, still beating). Again, Ollie did the honours; I’d definitely have been unwell if I’d been required to slather myself in diesel that often, indeed food wasn’t too appealing to me in this chop as it stood.

When, with military precision, Ollie opened the bar and sparked up a rollie, poor old Rebs (huddled at the stern, wishing it was rather more Mediterranean-esque) definitely took a turn for the worse and gave the fish at St Alban’s ledges some additional sustainence. Luckily, years of competitive rowing in Cambridge has forged her of stern stuff and she soon recovered. We’d deliberately set well out to sea, avoiding the worst of the ledge’s overfalls, but their presence was still felt. 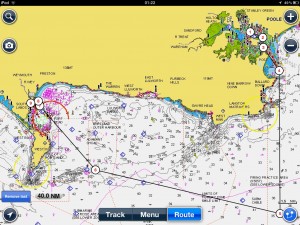 It was a matter of regret that we couldn’t sail closer past this iconic stretch of coastline: Catherine and I had canoed through Kimmeridge (one of my favourite south coast surf breaks), Lulworth Cove and Durdle door a few times before – and I know how attractive they are from seaward. However, I’ve a few friends who may have slightly poorer memories of Worbarrow bay, after a night we spent there in Acclaim, during a heavy swell, had proved less than restful (it’s a by-word for discomfort now), no mean feat for 23 Tons and 55 feet of boat.

I helmed for most of the trip and, after a few hours of crashing around motoring, sailing, and motor-sailing, including Ollie visiting the mast for another running gooseneck repair, we spotted the ominous and unmistakeable profile of the Isle of Portland looming ahead and, shortly afterwards, spotted the East Shambles cardinal buoy on the horizon so steered for the warships gathered in Portland Harbour’s shelter.

Rounding up in the lee of the harbour, sails flapping hard in the wind, the discovery was made that the morse control had stuck in astern so, whilst we half hove-to and half sailed in circles, Ollie disconnected the gear cable from the morse and gave it a few technical taps. A combination of stiff cable and proximity of an adjacent bolt had fouled it. 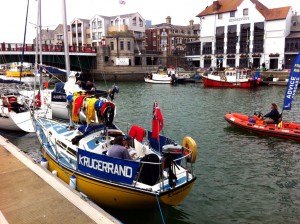 Weymouth Harbour – drying out, filling tummies with fish & waiting for the bridge lift

Entering the calm of one of the UK’s most sheltered harbours was a welcome relief, tempered by the gears again sticking in backwards as we came alongside the fuel barge for the customary top-up of ’60/40%’ Red Diesel (not to be confused with alco-pops kids).

We tied up temporarily to the Harbour’s waiting pontoon, for the 2 hourly lift, our sodden clothes draped over the boom and dripping onto the deck; in sharp contrast to the larger yachts, many returning from the RTI race, some of which were large enough not to be bothered by the splashes which had so drenched us. As the sun peeped out, we munched contentedly on some of Weymouth’s finest fish and chips from Bennetts (I can highly recommend the mackerel bap, which I’d have in preference to cod most days – oily fish is just luuurvely).

After the bridge lift and general bundle into the inner harbour, we tied up in front of a live aboard at the head of the pontoons, pleasantly close to the facilities which we made use of to get warm. 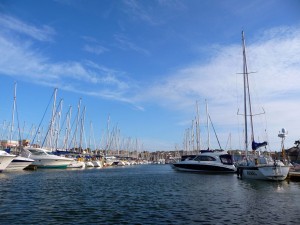 Weymouth Marina – sunny on arrival. The last of that golden orb for a few days.

Good things, as they say, can never last: the pressure of work and family had recalled Ollie to West Mersea who was forced to hop onto the 5pm train after a week of what, by then, was relatively uninterrupted good sailing and passage making.

I suspect his leaving was also slightly with an eye to the forecast: other than that evening, Rebs and I spent what could only be described as a miserable 2 1/2 days waiting for gales and incessant rain to pass before we ventured out.

Our spirits were lifted when Catherine, my two daughters (taking an impromptu day off school) and Hamish the Springer came to visit the next day (also John Snow wandered past minus any ‘swing-ometers’ of any sort). Although the rain only managed to subside for a mere minutes at any time, we took a trip out of pretty Weymouth to the stunning Dorset coastal scenery of Falkner’s Moonfleet. A warm pub lunch and then the inevitable disappointment as the girls drove home, leaving us forlorn and damp on the quay.

It would have been tolerable if we could have retired to our cabins to stay warm and dry, but the British summer was having none of it: as soon as dry clothes were procured they’d be drenched again by the summer weather. The entertaining Spirit Of The Sea FM kept a little joy in the boat, with a jolly but somehow haunting ‘Sailing the Portland Race’ reminding us of what was not far outside the tranquility of Weymouth Harbour.

To cap it all, it was too continually wet to be able to seal the hull deck joint, which filled the cabin and lockers with water, every time the gunwales were under, requiring bailing and later sponging out, leaving a residue of hygroscopic salt, plus a scum of bilge oil, everywhere.

On a more positive note, the gear cable was replaced, bilge pump seviced, floor repaired, cockpit cleaned, bits of string attached, breather tube cleared (meaning we could now fill the fuel tank at more than 1 litre per century) and attempts made to stop the forehatch leaking all over long-suffering Reb’s bed (with less than 100% success, to both our regrets). Unusually, a number a problems were causing a rain leak, but almost no ingress of water when the decks were awash at sea – removing and re-bedding hinges and bolstering the main seal did much for this, but condensation in the cramped forepeak still presents a dropping-on-the-nose-whilst-sleeping annoyance.

Additionally, great hopes were put in the tightening of all fuel joints, in order to dissuade the (otherwise trustworthy) Beta Marine BZ482 from inhaling too much air (no difference, as I found out on the trip to Dartmouth).