There was no putting it off any longer: one of the UK’s most notorious tidal races and generally treacherous stretches of water would have to be navigated, in order to reach the West Country.

Rebs and I spent an awful lot of time passage planning, deliberating, discussing and reading about the fabled inner route, a smooth conveyor belt of water inside the maelstrom of the race, extending roughly a cable or two off of The Bill itself (for the uninitiated, one cable is 608ft, or 1/10th of a nautical mile (which itsself varies in length with latitude, because it equals one 60th of a degree), or about 185 metres… at least I hope so, it’s rather too easy to get confused). 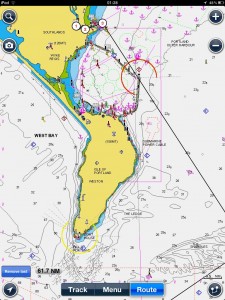 So, we did what the best navigators of small boats, with limited crew, do in a large spring tide near a tidal race with fog forecast and little first hand local knowledge: swallowed our pride and gave the whole bloody shooting match a good offing of a few miles, including the Shambles bank. Besides, we were heading to Dartmouth, rather than the bright lights (?) of Exmouth or the Blue Rinse of Torquay a good few degrees further north. 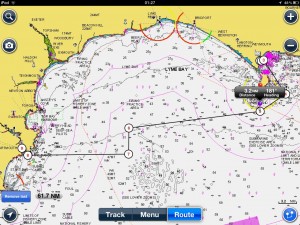 Lyme Bay and our approx route to Devon

As it would turn out, we were joined for a while by a smaller boat than us: a pretty 25′ sloop with 2 crew (like us) who, after waiting in Weymouth for the weather to turn for the better, were returning home to Teignmouth (between Exmouth and Torquay) after the RTI race (unlike us). They’d visited the superb ‘Stables Pizza and Pie Bar’ the night before, after our recommendation, and now followed us out of Weymouth on a misty morning. After shadowing each other for some time, we finally lost sight in the murky gloom of the fog, now down to a hundred yards visibility, leaving us alone with the rattling of the radar reflector in the rigging, as my half-arsed system for hoisting it did its job. 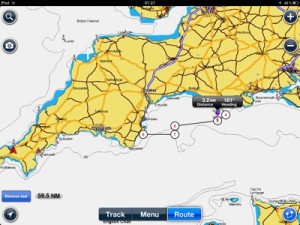 The immenseness of Lyme Bay in context

Thankfully, after a couple of hours, the weather began to gradually clear as we entered Lyme Bay, although clung gloomily to the dark slopes of Portland Bill so that we only got a couple of glimpses of the fabled lighthouse, through the mire which surrounded it. The S-SW F4 or 5 gradually dwindled to F3/4 and the expanse of Lyme Bay spread itself before us. 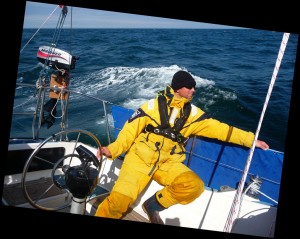 better weather in Lyme bay after the mist lifts

Apart from some mildly lumpy bits of sea and needing to perform a large tactical tack in order to make course for Dartmouth, the monotony of the crossing of this huge bay, taking in Dorset, Somerset and Devon, was broken only by the incessant need to go below and slosh ones self in diesel whilst bleeding the engine every twenty minutes (we’d never make the distance in time without it on occasion). Indeed, as the weather cleared, the wind dropped further and the Devon hills leisurely crawled into view, I’d probably done this a dozen times before we gave it a peremptory last bleed and chugged into the beauty of a sunset in Dartmouth Harbour. 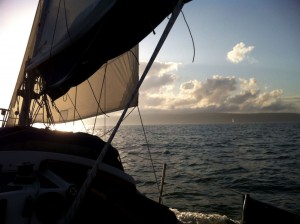 The sunlight shafted through the clouds, illuminating Dartmouth in an almost heavenly welcome, as if to say “sail in here, weary travellers”. Rebs and I happily complied, soaking in the now fine evening and the views. 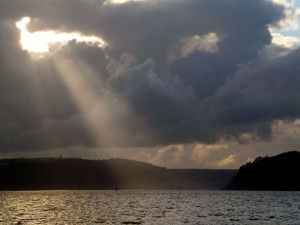 After tying up in Darthaven Marina and chatting to the RNVR geezers we’d seen in Weymouth, from a cruise in company which had somehow become a cruise in fragmented company as everyone got lost, we checked on the progress of Phil, another old mate, who was to bring our number to a staggering three. Luckily her has an unerring ability to make superb progress in any motor engined vehicle (more astonishingly, without the close attentions of the police) and his journey of a few hundred miles were completed in mere minutes, as is usual in these circumstances (he is never seen on a train, mainly for this reason).

Phil arrived around midnight; we clambered as quietly as possible across our neighbours foredeck, but no matter as they were deep into what I guess was a bottle of rum and boxes of cigars with friends, guessing from the noise below. They weren’t up with the lark the next morning, but neither were we. 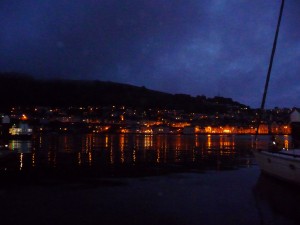 Dartmouth at night, from Darthaven