After the night of a gale blowing swell into Fowey, whistling in the rigging, rocking and shaking us about, we arose bleary eyed and stared dumbly at the tugs thundering past, going about their business. Fortunately the weather had passed in the night, howling off to torment those further East during the day (we heard the BBC news of floods and damage), leaving a calm harbour with no sign of our night’s unrest.

Eventually, the reason for the tug’s activity became apparent when, shyly, the pointed prow of a large cruise ship tentatively poked her nose into the harbour entrance, as if peering around the corner to check there was room (and immediately dwarfing everything else). The tugs scurried away after it, pushing and pulling it out of sight, before re-emerging, ignominiously dragging their prey backwards behind them. 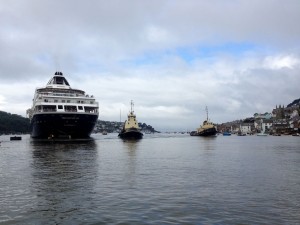 The yellow beasts huffed and puffed: slowly, inch by inch, drawing this leviathan into the now calm pool of Fowey.

MY Holland had been moved, banished to a new mooring outside the harbour and, after an hour or so of careful negotiation, the work crews had her stern’s three thick hawsers secured to the mooring buoy nearest us; her passengers (some in dressing gowns) regarding the bedraggled crew of Krugerrand with as much interest as we watched their proceedings as the Prinsendam (more Dutch connections) was shackled and bound. 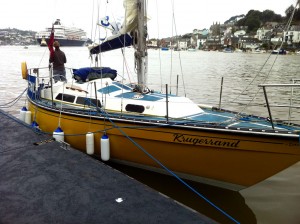 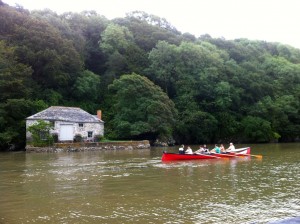 And so, our thoughts turned to the possibility of leaving, the fury of the recent winds making us cautious. The peculiar forecast gave us the possibility of a bit of everything – including a F7, although this was a relatively short trip and so we decided to risk it. 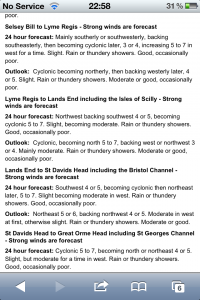 Strange forecast, but we only saw calm and the top end of a F6. It was fine sailing

We left Fowey, crossing St Austell Bay in a gently running swell and an eerie weather impasse: an uneasy truce between the gale and whatever was coming next.  The visibility was reasonable but weather felt close, low dark clouds scudded across the landmass, precipitation most definitely in sight. By the time we passed Megavissey Bay the rain and mist had reached us too, obscuring the land, but were soon blown away to be replaced by clearer skies and a rising wind. 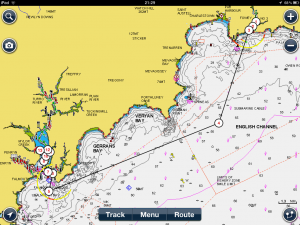 Both sails were up off Dodman Point and, by the time we cut across Veryan and Gerrans Bays, it was in a healthy NW wind, close hauled, main reefed (eventually – must resolve that), a tuck out of the roller headsail and howling along beautifully. One of the finest sails of the past few days (conveniently ignoring the fact that this put the gunwales under with associated gallons of seawater inside the main cabin – time to get that hull deck joint sealed!). 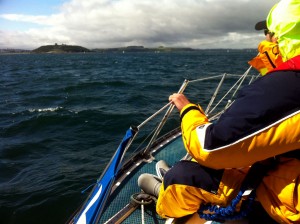 We all took turns to helm and managed to clear St Anthony’s Head easily, easing off the wind to pick up speed, up to 7 knots readily seen. From the ships anchored outside the Carrick Roads, another tack cleared us into the entrance to St Mawes Harbour and then another across, ready for either a close shave up the east coast or resigned to short tacking (rather appealing in these conditions) most of the remaining couple of miles to Mylor. 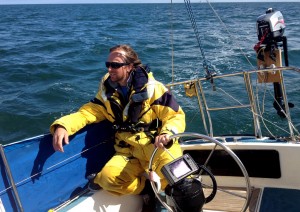 Fine sailing at the sheltered entrance to the Carrick Roads.

However, circumstances conspired against us: the bodged gooseneck parted, the boom pushed forward, the main took on an unhealthy balloon, and we could no longer point well enough to make short tacking a worthwhile exercise. Instead, we motor sailed up the channel, enviously watching the fine sport about us but still satisfied from our own wonderful sail. 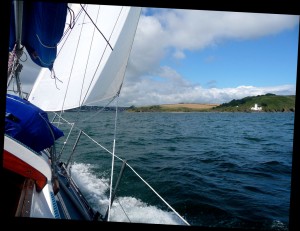 With the very last half mile came the final small drama: we stared at the deepometer in wonder: 20 metres, 10, 5, 2metres, 1.8metres!  Quick! About turn, get back to the channel and lick our wounds.

I realised that, despite all of the careful passage planning during the previous 500 miles of the trip (I think the log showed 490 by then!), I’d neglected to consider that this last section could be anything other than the deep harbour I’d assumed it to be when staring at it from the shore. But there, staring at me from the chart, was a dredged fairway leading into Mylor and, at low water (shortly after springs), the 1.4s and 0.7s mocked me. 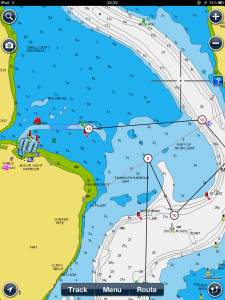 Mylor and the north Carrick Roads. More shallow than I’d imagined outside of the main channel

Of course, it all made perfect sense: the gently sloping kelp and bladderwrack cloaked rocky shores on which I’d walked with Catherine, Poppy & Rose (and which Hamish had galloped across, chasing herring gulls at low tide) were unlikely to have shelved steeply to the 5 metre depths I’d imagined.

After radioing Mylor Yacht Harbour (VHF channel 80) to ask which buoy we should pick up and tell them we were arriving (another glaring, but now obvious, omission) the launch motored out into the chop to guide us in, a generous gesture considering the soaking the lad got.

As it happens, our course north west from the main channel would probably have got no shallower than 1.8, however it’s rather more shoal (shown 0.4m at Chart Datum) approaching from the north. This was confirmed later in the bar by a local sailor who reported the occasionally drying dredged bank edges of the bank visible at some very low springs – and varying depth elsewhere, depending on where the channel dredgers had heaped their mounds of underwater spoil.

By way of a silver lining, we were given a temporary berth on Mylor’s outer pontoon. Although we’d obtained the mooring in March, it still required mooring chains due to our unannounced arrival. Therefore, whilst these were being attached, we un-shipped two weeks of baggage and detritus and moped around in the general malaise of anticlimax which one experiences at the end of an adventure. 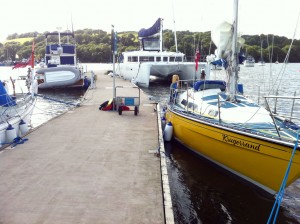 Mylor! Apart from the trip from the pontoon to our swinging mooring, the journey was over.

Catherine, Poppy and Rose, a sight for sore eyes, arrived from home just in time for a drink in the yacht club (and a chat with a couple mentioned earlier in this story – of J Class and Super Yachts) and then we were home. Phil and myself due to travel up country for work in Hertfordshire and London on Monday; Rebs expected to row for her Cambridge club on Sunday evening, to where we headed the next day after the first night in a comfortable (dry) bed for a while.

It would be at few days before I would be home again and able to explore the fine sailing territory of the Carrick Roads with the girls, but that’s another story. 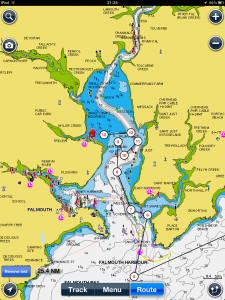