Being a latish start (Kevin decided against joining us, due to a hangover and work), this was due to be one of the shortest legs of the trip, owing to the likelyhood of strong winds by the time we’d be either a) passing through the Needles or b) taking the northern route past Hurst castle. Just as truthfully, possibly because Yarmouth is a nice spot and we fancied taking it easy for a day, after all we’d covered a couple of hundred miles in only 3 days and didn’t need, or want, to get to Poole immediately (with hindsight, it would have been more comfortable). 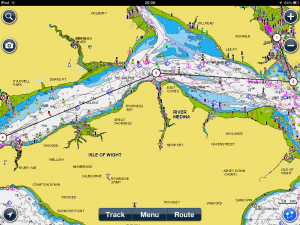 Call QHM on VHF channel 11, to cross the channel from N to S inside Pompey harbour, pop up to the fuel berth at Gosport Marina, rush out through the narrow entrance then take the transit (align ball-topped war memorial with edge of tan block of flats) for the safe corner-cutting channel between Hamilton and Spit Sand Bank. The Portsmouth routine completed by the close passing of the Ryde ferry and the Bothercraft buzzing past. 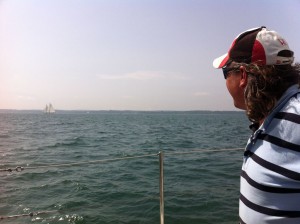 Ollie admires Eleanora, a replica of the 1910 schooner Westward, in the twinkling waters of the Solent

For now, the gentle F3/4 Easterly breeze pushed us Westwards, whilst the coastguard helicopter (India Juliet?) and a smaller Coastguard cutter performed some sort of coordinated exercise with a RIB and one of the larger UK Border Agency Cutters (later in the journey, one of these cutters crept up silently from nowhere and appeared a mile off inshore, apparently shadowing us, whilst we coasted along to Fowey). At Cowes the wind dropped a little and we noticed, only a mile away, that yachts in the Western Solent had suddenly dropped their downwind sails and started making upwind on the same course. An curiously exotic smelling warm breeze filled the air and it was obvious a new weather pattern had taken over, presaging dramatically different conditions to the existing benign weather (either that or Ollie was working on one of his weather changing culinary marvels again). 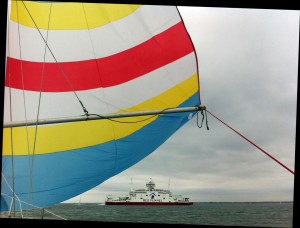 What’s brown and steamy and comes out of Cowes? Not the IOW Ferry any more – it’s been Red and White for years.

As we passed the ever pretty Newtown Creek (I wonder how the Van de Stadt Invicta 26 ‘Newtown Maid’, which I used to sail on, now fares?), I spotted a beautiful red hulled boat emerging from its entrance, Not being able to resist the lure of another Varne, we circled Aldebaran and hailed her crew, discovering we were both bound for the same place and arranging to meet.

After the wind switch, it was now either a gentle tack up the Solent, or make for Yarmouth with the donkey on, in order to make the Swindlery for charts and to replace other broken bits (the main sheet blocks etc etc) before it closed. Besides, there’d be more time for the boozer. Oh, and I suppose we’d need food the next day too.. as our ‘fridge’ (the sink) doesn’t exactly keep food fresh.

We slipped inside the safety of Yarmouth harbour just as the wind began to pick up (it howled a bit in the night), congratulating ourselves on our superb planning as the smell of the beer got closer. 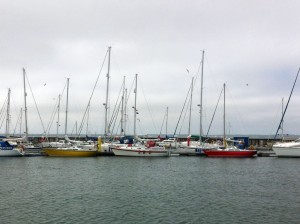 Krugerrand and Aldebaran. A splash of colour amongst boring white hulls.

After goggle eyeing in the Deli and an extremely congenial meeting with Danny ‘in Newton Creek, I ran aground for the first time ever’ (not enough time on the East Coast if you ask me) and his crewmate on Aldebaran, we all retired for the afternoon (and evening, in our case) to the Bugle Coaching Inn’s, very snug, snug (why, on earth, would one wish to sit elsewhere in there?), sampling ale after wonderful ale. 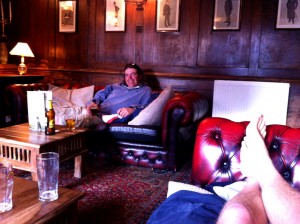 Ollie, happily ensconced in his second favourite place (“a pub’s only for when you’ve run the bar dry at home”)

The comfort of the marina facilities in Yarmouth are superb, as long as you remember your shower token, otherwise an ignominious be-towelled trip back outside is the order of the day. 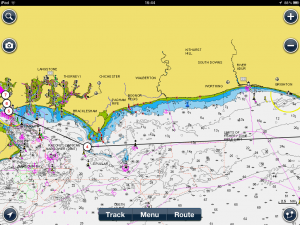 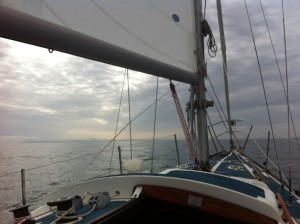 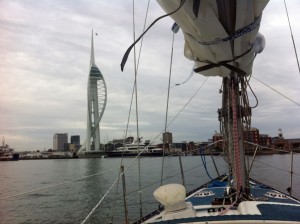 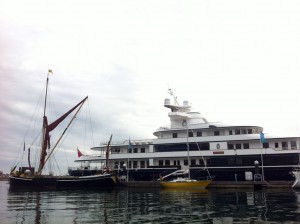