I’d last been to Ramsgate when working for a diving company, which was involved in construction of the Thanet Offshore Windfarm. Although the divers had now left, operations for much of the London Array Offshore Windfarm must be based at the same place and the scale of the operation is impressive, not least as reported by the bloke at the fuelling barge, who suggested almost a million litres of fuel is used weekly by the 30 or so very fast, large, catamaran work boats operating from the harbour (seemingly 24 hours per day, but by my calculations that’s almost 200 litres an hour each – possible, but implausible – maybe that was his, still impressive, total sales). The harbour is a buzz of activity and a not unpleasant place to stay, although one would tire of the town within a couple of days.

We left, intending to get to Eastbourne, before 5am – with the high tide, as the sky was lightening; a variable F2 with smooth sea, disturbed mainly by the tide swilling around Ramsgate (is it ever slack there?) . We motored across the calm sea, against the current between Brake and Goodwin Sands, the wind gently strengthening as the sun rose. 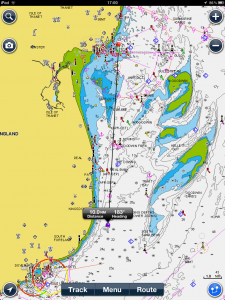 By the time South Foreland then Dover hove into view, we realised the fine day would make for fine passage making, motor sailing with Dave the green and red auto pilot (bungee cord) easing some of the steering burden and the superb Standard Horizon CP180i simplifying the navigation work. As usual, Ollie counted down the opening of the bar, at 10am (in mitigation, we started at 4:30am), with almost as much fanfare as Seb Coe and LOCOG could ever plan for London 2012. 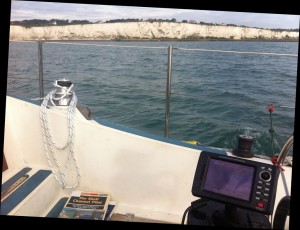 Off Dover. Dave the autopilot (bungee cord) doing sterling work, alongside the superb Standard Horizon electronic wizardry which makes sailing a little simpler… and Tom Cunliffe’s fine and ageless publication (except when it’s totally out of date).

With Ollie hissing and spitting Old Speckled Hen, we haughtily ignored the passing of Dover; the poor chap’s spent too many storm bound days in port there, wearily trudging around the castle for the umpteenth time, in order to pass the time. 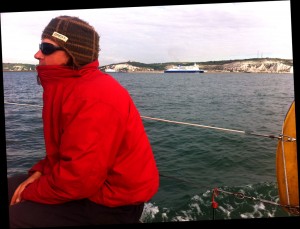 If I ignore Dover, it will go away.

We weren’t near springs and the fair tide whipped us past the peculiar bleak landscape of Dungeness power station with little drama. The weather had closed in by now, a F3/4 but visibility fairly poor; we glimpsed the base of the spooky looking, although still slightly majestic, Beachy Head lighthouse through the mist as we passed close to shore, cliffs not visible in the low cloud and fishing boats trawling nearby, in that confined and closed landscape of limited visibility, with the wind failing slowly. 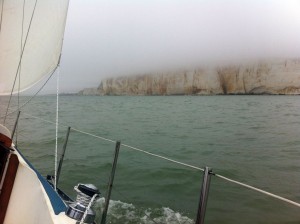 The low cloud stayed with us past Seaford until the bay at Newhaven (where, by now, we’d decided on making landfall). 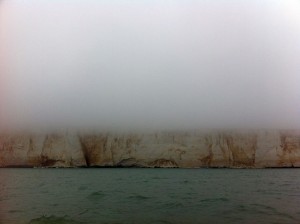 We approached Newhaven harbour somewhere before 19:00 (look, my log’s onboard as I write this, does the exact time matter?), noting the harbour entrance lights and hailing harbour control (and the large dredger working the outer harbour) on VHF for permission to dodge past, before taking a visitor mooring inside a very grand large modern yacht in Newhaven Marina.

Newhaven’s a strange place: small, but dredged deep for the Le Havre and Dieppe ferries which use it, in contrast to the majority of yotties who’ve eschewed it for the greater comfort of the new Sovereign (Eastbourne) and Brighton Marinas, under 10 miles to both the East and West. This decline’s probably well illustrated by the perfectly serviceable, but slightly shabby, facilities and the marina charge being collected by the friendly and cheerful girl, who lives with her partner in the back of their van in the marina’s car park. 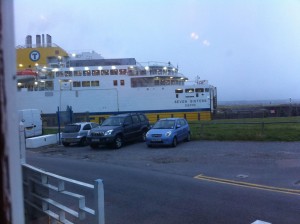 Large ferries keep Newhaven alive; most visiting yachtsmen have forgone it for the luxury of Eastbourne and Brighton marinas.

Newhaven’s still a working port and it presents a friendly, amicable, soulful and far from unpleasant existence; I, for one, rather like the place. Certainly the extremely convivial company at the recently (most tastefully) refurbished ‘Hope Inn‘ helps. Despite insistence that it would be ‘as it should be‘, the medium-rare steak was quite well done, but it was certainly well appreciated and the local beer (Harveys?) was bloody good indeed. Somehow, room was made for the superb home made puddings. All in all very satisfactory and we retired to passage plan and thence to bunks.

Rather weirder was the tannoy system, playing a regular opus of tortured and distressed herring gulls throughout the night which, we presume, is to dissuade them from fouling everything. It must work because we saw barely anything of the dreaded shite-hawks. 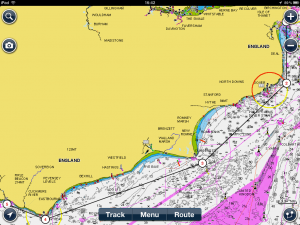