I planned this leg as ‘Dartmouth to The Yealm’, for the previous day, to meet our friends on another Varne – Osea Mist. However, because of the earlier weather, we were a day late and they were elsewhere. Therefore, we decided to stop in Salcombe for lunch (good shout Rebs). 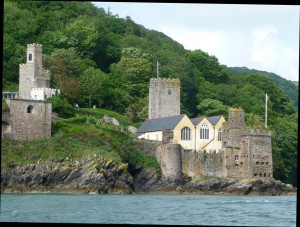 The tides were a little tight for getting in and out of the Yealm without drama and so, because of Phil’s night time arrival and our later start, by the time we found ourselves slopping the Skerries and trying to fly the cruising chute in a F3 in a swell off Start Point (it never really work, does it), we decided to put into Salcombe and remain there for the day, as it’s such a great spot. The River Yealm would have to wait for us another day (a good excuse to rearrange our meeting with Happy Jon on Osea Mist). 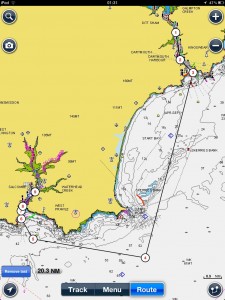 Leg 8 – Dartmouth to Salcombe, via Start Point (not that there’s really another way than this without crossing the channel). Thursday 5th July 2012

However, this meant we approached Salcombe Bar at springish low.. which means there ain’t an awful lot of water. We saw a couple of yachts approach, perform an immediate volte-face and clear off out to sea.

Krugerrand draws about 1.7 metres, but there wasn’t much swell and, besides, she’s used to the East Coast being a lot shallower (just not rocky).. so we gave it a bash.. and found no less than a metre and a half under the keel (OK, so we may have done a quick bit of tidal calcs rather than just relying on being gung-ho). Another boat followed us in, less close to the deeper channel than us, but spun around quickly and made out to their anchorage in the bay again. 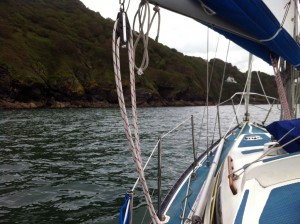 I’d rather not have had the worry about the engine conking out again, but gave it another pre-emptory bleed and ploughed on.

Salcombe’s worth the nail biting entry. I’d not been there since staying in a YHA aged 15, during a mammouth Buckinghamshire to Cornwall cycle ride (we started on the ancient Ridgeway path and sort of got carried away). Salcombe’s even better better than I remembered – but then, everything is from seaward. 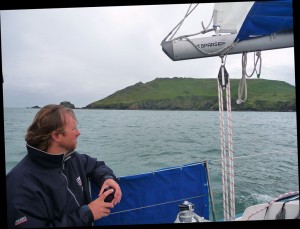 Entering Salcombe. Me: thinking about something or other

After the shallow bit, just stick to the channel (it’s still shallow and rocky either side) and.. admire the scenery. 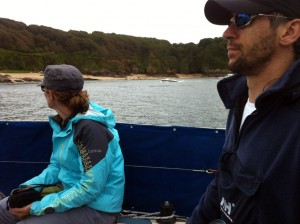 Rebs and Phil (on helm) admiring the scenery. Fantastic on a summer’s day.

After a quick fill up at the fuel barge, enquiries of marine engineers (would be good to get the Donk sorted, ‘eh), we took the water taxi into town and made a fantastic (if rather purse-clearing) picnic from supplies at the Deli, which we ate whilst admiring the views at Cliff Gardens (?), before retiring to the pub for a leisurely read of the papers and St Austell Brewery’s finest refreshment (and some Cornish Rattler too). 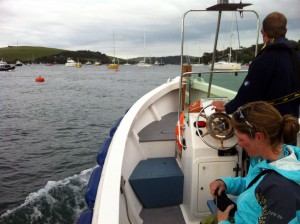 Making our way back to the mooring in comfort

Pump up the (superb) Bombard AX2 and watch Phil potter about with the 2.5HP mariner at full chat (for whatever reason, Rebs decided against rowing all the way to Frogmore Creek and back) followed by a foray into town for take away Fush and Chups.

Phil driving anything: 2 position throttle (off or full). Be Afraid.

We weren’t going anywhere the next day until the Marine Engineer’s 9am visit to fault find the air leak, so it was a rather relaxing afternoon and we felt proud of ourselves for enjoying this day which, preceeded by the scenery of the sail here with minimal motoring, actually felt like a holiday. 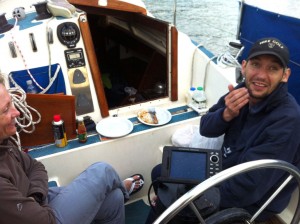 To cap it all, we were rewarded in our sated state by a super sunset, which we watched with mugs of tea, before a gentle rainless night. 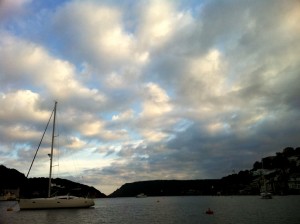 A great Salcombe sunset to boot.

By the way: the image which may still be the top of the page, if I haven’t changed it, is whilst moored (for the sum of £16 Harbour Dues IIRC) at Salcombe.