The camera now stays away when the weather’s poor (I’ve lost a couple of phones that way), so you’ll have to excuse the lack of pictures and substitute imagination instead, although a video camera on the foredeck would have provided good entertainment. 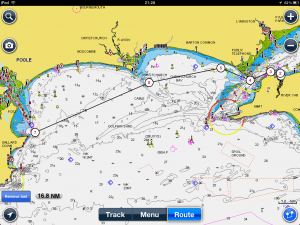 With hindsight, wind blowing swell into the bays all night – and the SW F7 – should have hinted that we’d get a little wet, although it was rather frustrating that the hull-deck capping joint decided to leak again too, ensuring that, even if gallons of water hadn’t come down the companionway, it would have been wet inside anyway. On top of that, the gooseneck on the Z Spars boom broke, meaning it was rather difficult to point, just when we’d rather do so, and the engine kept conking out, due to it preferring to breathe air rather than diesel. Still, we got some unexpected surfing in, and it all makes for a more interesting life, eh. 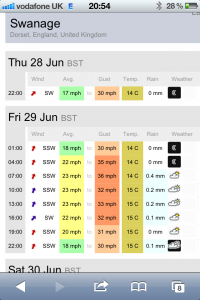 The land based forecast that morning. I don’t recall seeing any sun that day however…

I’m sure Ollie would have been fine, but Weymouth would honestly have been too far for me in those conditions. Therefore Poole, via the North Channel exit from the Solent (very fast on a good ebb, although a little bumpy, too shoal in that swell, and a bit too much of a lee shore by the time we were committed), and Christchurch Ledge (really not cricket in much of a swell, but frankly the entire bloody bay was full of breaking waves, so it hardly seemed to matter) was the plan.

On a brighter note, the 1/2 tablet of Dramamine worked its magic and I felt only very marginally unwell (a whole tab would have dulled my already atrophied brain), although I wasn’t going to risk going below to bleed the ruddy engine.

Besides, when it comes to Infernal Confusion Engines (as well as beer), Ollie is a professional and seemed perfectly happy to leave me on the helm (where I function best in heavy weather – and I don’t usually do a bad job). He spent more of the trip below than I’d have dared, bleeding the engine, tinkering with cups of tea, mugs of coffee, pints of beer, pots of noodles and bars of chocolate (for all of which, Ollie, I am eternally grateful)…. or simply trying for hours to get his sodden roll-ups alight in the relative dry.  He would occasionally stoically poke his head out, still dressed in the equivalent of (sopping wet) Sunday best crossed with Engine Room or Stevedore attire [note to self – when a millionaire, present Ollie with some actually waterproof clothes, to replace those which were once waterproof and now just pretend], hop up on deck in order to get a lungful of fresh air / survey the view of whichever breaking wave had just tried to knock us down / we’d fallen off the back of / or check I wasn’t running us onto the shore early, in a pique of cowardice.

Ordinarily, he’d get sloshed by another bucket of South Coast vintage 2012, glare bedraggledly at the sea and retreat below to light another rollie. Frankly, if I didn’t get ill at the first whiff of Derv in a heavy swell, I’d have joined him for a beer and a pipe. The Lucky Bastard.

A note for those interested in the finer points of Mal de Mer prevention: the active ingredient in Dramamine (Dimenhydrinate) appears to have been banned in the UK many years ago, although it seems to be available in every sweet shop, newsagent and petrol (sorry, gas) station in the US. I had to resort to importing a couple of tubes (and hoping it wasn’t made by Hookey Pharma Inc.), after discovering its wonders during a tropical storm in the Carribean – and the subsequent Atlantic crossing in the same Nic 45 (annoyingly, I ran out after a couple of days, so resorted to the usual stomach emptying weight loss programme). 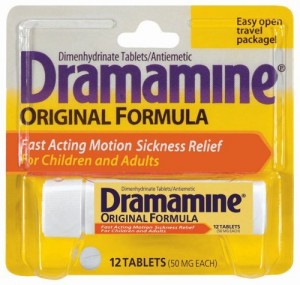 hey, it’s a colourful picture. Don’t complain, I could have written some more dross instead.

Anyway, 31–38 mph is a F7, so I guess that put us squarely in one and the Met Office inshore waters forecast concurred. Apologies to those who work in knots (it’s 27–33 kts), but the earlier screen shot was of a land based forecast, so you can safely assume there was no less than that in Poole Bay. We wouldn’t know, because the brand new wind-ometer (sorry, anemometer for the pedants amongst us) from a company which sounds like it makes sweets, had stopped working some time ago: something to do with it being too expensive to deign to work its self on a small craft. Luckily the ancient Stowe deep-ometer as well as the TackTick one worked OK. It was certainly useful to know the sea was 14 degrees Centigrade, thank you TickTack.

Despite the windometer deciding it couldn’t see anything though the misty gloom either, we gathered that the wind had backed ever so slightly further south: allowing us, with our broken boom (which even Ollie wasn’t going to hang around on that foredeck to fix) to claw off across Poole Bay from Christchurch Ledge – and even point roughly where the fairway for Poole Harbour was supposed to be.

Eventually, in the far more pleasant conditions slightly in the lee of Old Harry’s Purbeck Hills, we spotted the Bar Buoy and waited at the shallow entrance, as a Condor Fast Cat bound for France was escorted by its Pilot boat into what I guess wasn’t the most pleasant channel crossing, even in a large ship.

Entering the sheltered, but still distinctly wind-whipped Poole harbour (the 2nd largest natural harbour in the world), we pootled past the chain ferry and ogled the silly buggers will full sail heading out for a race. Gratifyingly, most reduced sail and stayed in the shelter of the harbour. 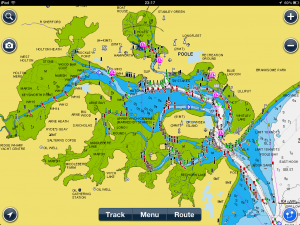 Poole Harbour: like the East Coast (mainly rather shallow in places).

A bit more pottering about, whilst trying to find somewhere to stay, until Tom Cunliffe’s fine ‘Shell Channel Pilot’ pointed out that Poole Yacht Club had a policy of letting waifs and strays use its member’s berths whilst they were away on their adventures.

Poole Yacht Club is a magnificent sailing organisation, seemingly strongly supported and with many yachting and dinghy classes, including its unique R19 One Design. It’s helped by the fact that the Poole Harbour Commissioners, eager to secure for its self the strategically positioned land on which club was then sited and owned, offered to buy it and provide PYC with a massive and ideally suitable chunk of real estate in return, upon which the club could build a splendid new Club House and operate with minimal overheads from then on, with a massive car park and ownership of the sea bed to boot (indeed, I believe it’s only a few hundred quid a year for members – an unheard of bargain on the South Coast).

The only downside is that it’s all rather squeezed in, so the rather peculiar sight of yachts motoring everywhere backwards (something most boats do not do easily or by design) is commonplace. Indeed, I didn’t manage the turn into our berth, so we slotted into another hole, comforted by the fact that our neighbours suspected its owners would have no intention of leaving wherever they’d managed to hole up in this weather, so we wouldn’t need to attempt an un-seamanlike exit and slot into a nearby available berth. 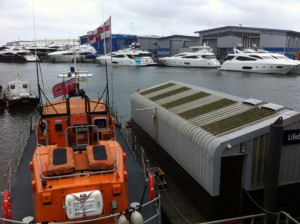 Poole Lifeboat Station and the Sunseeker yard (1500 employees, 95% of boats exported). Taken the next day, but you need a pic amongst this sea of words, ‘eh?

We had the rest of that afternoon to enjoy, wring the boat out, secure other bits we’d lost and to make running repairs: i.e. for Ollie to ram (probably not the engineering term he would use, but heigh-ho) a bolt into hole where the gooseneck broke.

The next day, Saturday 30th June, was the Round The Island Race; the forecast was for less wind, but still strong enough to make it an interesting one, certainly for the smaller boats. Rebecca, an old school friend and our new crew member, was also due to join us from Cambridge.

We spent some of the morning doing boaty stuff, whilst listening to the Round The Island dramas playing out on the VHF (capsized boat, injuries, winches, engine fires) and then ambled into the superb Poole Museum and spent a fascinated couple of hours looking at iron age log boats, reading about history of the harbour and inspecting various other nick-nacks. After an ogle of the Rona / London Sailing Project’s Ocean 75 ‘Donald Searle’, which I’d joined on a delivery from the Hamble to St Katharine’s Dock with the DSP when younger (or was it Rona II?) and admiring other floating objects, we could avoid our duties no longer, so obtained some diesel filters and other interesting marine articles. 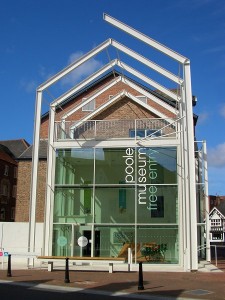 This was followed by Ollie instructing me in the fine art of Pre-Filter changing, in order to inspect and remove the gunk, which had been sucked into it the previous Saturday, when we’d discovered how badly the tank level indicator misread (and ran it dry – or more accurately, sucked the water, fuel bug, bits of string, fish and other detritus from the bottom of the fuel tank). We hoped this would help alleviate the rather annoying engine-stopping-just-when-you-least-need-it situation (it didn’t).

Rebs arrived on the late afternoon train, so we pottered into town for a combined dinner/luncheon, followed by a drink and passage planning session in the deserted PYC bar (everyone must be in Cowes for the RTI) before heading off to bed.