After finally getting her ship shape (mainly Ollie doing lots of engine work and gettng mucky in the bilges), the morning of Sunday 24th June in West Mersea didn’t provide the most auspicious beginning; at 4am it appeared that the inshore waters forecast was right and the gale presently whipping around wasn’t the best weather for navigating the shoal swatchways of the Thames Estuary. 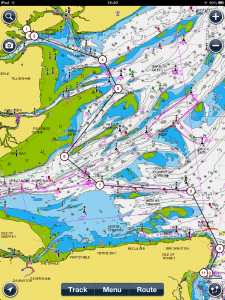 The Swatchways of the Thames Estuary. Mon 25th June 2012.

It hadn’t been pleasant for a couple of days so we were happy to return to bed (me to sofa) and delay our start until Monday morning, to catch the tide through the Wallet Spitway and across to the North Kent coast. Brief but heavy rain shower at West Mersea on Saturday, the day prior to our planned departure.

By midnight on Sunday, the next day’s forecast was much more reasonable: W veering NW 4 or 5, becoming variable 3 or less and showers later. 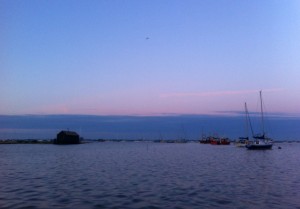 With High Tide (4.78m) in West Mersea at 4:43am on Monday, we took the ebb out of the Blackwater and watched the Gunfleet turbines glide past on the horizon as we were swept past the characterful Wallet Spitway buoy at 06:20. Being shallow, we’d left a couple of metres of tide underneath us, but no appreciable swell meant a lack of worries and Swin Spitway was soon behind us. 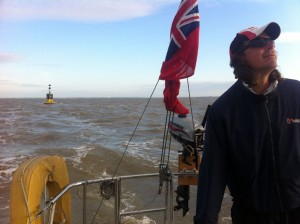 Fishermen and Foulger’s Gat were both unadvisable due to construction of the London Array windfarm, however I’ve always wondered about a connection of the name Foulger with a sailing friend of my father’s who lived in Burnham on Crouch and sailed, if I recall, an S&S 34. 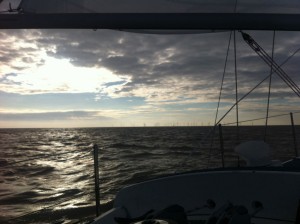 However, I’d already decided to go via the haunting sight of the wartime forts, so at S Whittaker, we turned south, passing the Maplin bank from Middle Deep; a good sized herd(?) of seals sunning themselves on the now exposed sands; later a porpoise paid a fleeting visit, one of two seen that day (the second was possibly a dolphin). A Thames Sailing Barge, possibly ‘Dawn’, swept majestically past at Foulness, full sail set. Only a couple of weeks before, Krugerrand had appeared in a couple of shots of a program Griff Rhys Jones had presented about Dawn and her old trading routes. Passing SW Barrow, in a pleasant F3, new mainsail setting well (except for a crease which Gowan suggested was batten tension) warm sun with little cloud, we cut SE across Oaze Deep – and away from the visceral-cavity-shock-inducing pressure waves, caused by immense explosions of missile testing at mysterious Foulness Island. Probably a dozen firings followed us, as we glid towards the looming shapes of Kentish Flats windfarm; the *whooomph* <followed by a few second silence> them a thundrous CAPHWHOOOOM.  Although the sound receded, the atmosphere remained – as a fitting backdrop to the looming Knock John fort to port and the approaching Shivering Sand’s Forts, the reason I chose this route. These eerie steel structures have seen action of many sorts since their construction in the 40s, from shooting down enemy planes to pirate radio stations and SAS traning grounds. At their hight in 1945, Shivering Sands was manned by 250 men; now just a handful of herring gulls rule. 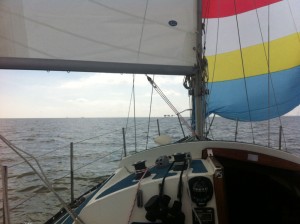 Poled out Genoa gave way to a Chute as the wind died. Shivering Sand Forts on the port bow.

Arriving just after low tide (1.05m – 10:41am) Shivering Sands was as folorn looking as I remembered, the last time I passed was in Acclaim, our Nic 55 (which we beached on sheppey) and before that in Treshnish, a Motor Fishing Vessel owned by the Dockland Scout Project.. or maybe a delivery trip on the Ocean Youth Club’s Oyster 68 (now that was a nice, large boat). Out through the Princes channel, past Margate and Thanet windfarm whilst flopping around trying to sail through anchored ships in light winds. Motor on, down past North Foreland and Joss Bay, where I’d surfed years before and crossed Ramsgate’s fairway channel after high tide and in a large cross current whilst the large work cats plough in and out, ferrying workers to the windfarm.

We berthed smartly at Ramsgate, unberthed to fill up with diesel (read 15 litres of), but get cut up by a 50′ long, 40′ high stink pot “it’s OK lads, I’m only putting 2 grand in” .. by the time we’d waited for this leviathan to finish, all of the shops have closed so we retired to a curry house and off license, before an early start the next morning.